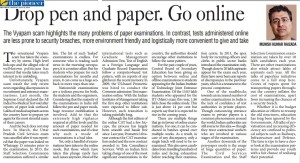 #Vyapam scam has unfortunately taken horrendous proportions but this is not the only scam related to recruitment and  entrance examinations.

My article: ‘DROP PEN AND PAPER. GO ONLINE’  highlighting the need for on-line examinations was published today, July 14,2015 in The Pioneer newspaper.

Just holding free and fair elections in a peaceful manner does not mean all is well with our democracy. The real issue is how we tackle the underlying problem of political finance – the mother of all sins.

My piece highlighting the importance of open and transparent funding of political parties and candidates to create a vibrant democracy published on December 22, 2014 in DNA web portal: How unregulated and undisclosed political funding threatens India’s democracy

RTI Assessment and Analysis Group (RaaG) and National Campaign For People’s Right to Information (NCPRI) have conducted a study on Right to Information (RTI) act. The study revealed that the Information Commissions are going easy on RTI complaints and almost 96% of the cases where there has been a delay or denial on information on RTI query have not been penalized.

On studying RTI responses from 21 information commissions, the study has found that 2.21 lac cases had been disposed of between January 2012 and November 2013. It was observed that penalty should have been imposed on 1.04 lakh cases (between January 2012 and December 2013) but only 3870 cases were penalized. Rs 5.03 crore should have been recovered from 22 states BUT only Rs 85.57 lac was recovered by 18 states.
Information commissions also have the power to award compensation to a complainant for the loss suffered. Although the number of complaints of delay or denial of information equaled to 3.89 lac, the compensation was awarded only in just 1339 cases. The amount of compensation imposed was Rs 29.68 lac but only Rs 4.07 lac was recovered.
A strong RTI act is crucial for strengthening democracy. It makes the Government more accountable and transparent and is the biggest weapon against corruption. The soft approach of information commissions will only weaken its power and defeat the very purpose of RTI act.