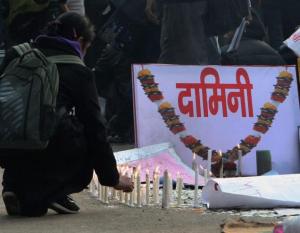 The Damini (actual name Jyoti) gang rape case in Delhi in December 2012 not only jolted the conscience of the whole India, it also became a global news. The whole incidence was characterized by  perverted barbaric acts by the group of 6 men, lapses in police surveillance and related law enforcement (fake address submitted by the owner of the bus). In the days and weeks to follow, massive protests by the public were symbolic of anger against the inefficient governance, insensitive statements by political, social and religious leaders of all colors and hues.  Very unfortunately, Damini ultimately succumbed to her injuries at a Singapore Hospital leaving behind a sense of guilt in all of us!

In a recent survey of G-20 nations, Canada has emerged to be the safest place for women to be in! And India is at the bottom of this list. USA stands at # 6.

Damini case raised intense debate in media over the status of women in our society. Is a woman safe in our country? The question is being raised as to why so many rape cases occur across India. One statistic data showed that every 40 minutes, a woman gets raped in our country. In the year 2011, there were about 25,000 cases of reported rapes all over India : Madhya Pradesh accounted for 14 % of all cases. Now you will agree that several of the cases are not even reported, hence the actual number might be much higher. And obviously, this data does not include the other forms of violence against women.

In Indian (Hindu) society, we grow up worshiping goddesses like Parvati, Lakshmi, Durga. Our value system teaches us that women are to be treated with respect and humility. Yet, there is a disconnect. Significant disconnect, actually! The discrimination against women starts even in womb as exemplified by female feticide. We treat women as subservient to men: at birth, she is probably considered as the property of father, and after marriage, a property of husband. Similarly, dowry and domestic violence re other manifestations of this bias against women.  A usual Indian man can not generally stomach the idea that women too can have an independent existence. In other words, the feudal mindset in Indian males gets ingrained right from childhood when he experiences this at his home (sisters, other women getting less preferential treatment than men) and in outside world.

The horrific rape-case has ignited a debate all over the country demanding tougher laws and more accountable police. The central Govt has announced Justice Verma commission to undertake the judicial review of laws dealing with rape and related violence. Voices are also being raised that rape cases should be dealt in fast track courts.

Combating the menace of women violence requires a multi-pronged approach. It goes without saying that a stricter and efficient criminal justice system will be a great deterrent, but the societal reforms are equally needed. The things must start from home: giving women its due! In other words, gender equality and gender -sensitivity! Also, schools can help provide a balanced dose of health and sex education. NGOs should play a role in injecting the social input in the society on the overall issue of women’s rights and place!