Reality not rosy for US blacks 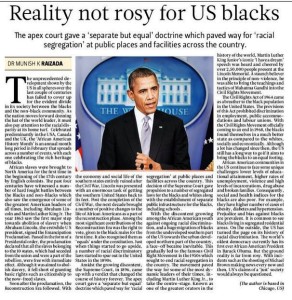 On the outside, the US has turned the page on its history of racial discrimination. The world’s oldest democracy currently has its first ever African American President in Barack Obama. But the ground reality is far from rosy.

As  USA celebrates February as ‪African American History Month, my analysis published on February 20, 2015 in the Chandigarh and Delhi-based Newspaper “Daily Post”: Reality not rosy for US blacks