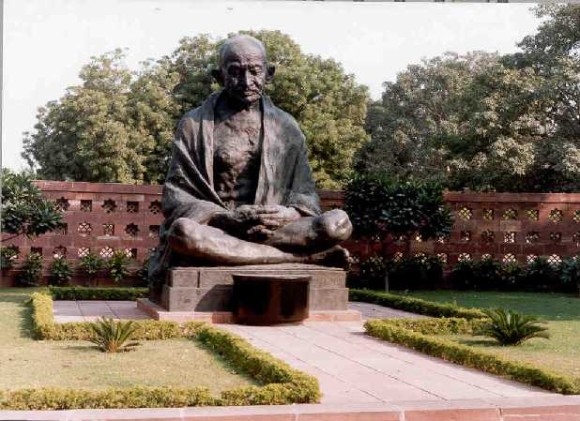 This article was published on August 18,2014 in “The Political & Business Daily”. The clipping is attached. 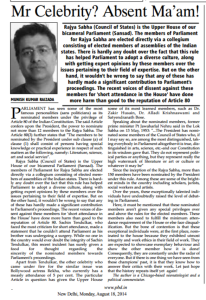 The Parliament has seen some of the most famous personalities (sans Politicians) as its member, due to the power of Article 80 of the Indian Constitution. The said article confers upon the President, the power to nominate (not more than) 12 members to the Rajya Sabha. The Article 80(3) further states that “The members to be nominated by the President under sub clause (a) of clause ( 1 ) shall consist of persons having special knowledge or practical experience in respect of such matters as the following, namely: Literature, science, art and social service”.

Rajya Sabha (Council of States) is the upper house of our bicameral Parliament (Sansad). The Members of Parliament for Rajya Sabha are elected directly via a collegium consisting of elected members of assemblies of the sates of India.

There is hardly any doubt over the fact that this rule has helped the Parliament to adopt a diverse culture, along with getting expert opinions by these members over the issues pertaining to their field of expertise. But on the other hand, it wouldn’t be wrong to say that any of these has hardly made a significant contribution to the Parliament’s proceedings. The recent voices of dissent against these members for ‘short attendance in the Parliament’ have done more harm than good to the reputation of Article 80. Sachin Tendulkar, who faced the most criticism for short attendance, made a statement that he couldn’t attend the Parliament as his brother was undergoing a surgery. While no one in the country would ever doubt the integrity of Sachin Tendulkar, this recent incident has surely given a food for thought regarding the sincerity of the Nominated members towards the Parliament’s proceedings.

Apart from Tendulkar, the other celebrity who came under fire for the similar issue was Rekha, who currently has a measly attendance of 5%. The particular article in question has given the Rajya Sabha some of its most learned members, such as Dr. Zakir Husain, Dr. Alladi Krishnaswami and Satyendranath Bose.

Speaking about the nominated members, Jawaharlal Nehru said in the House of the People on 13 May, 1953:

“…The President has nominated some members of the Council of States who, if I may say so, are among the most distinguished, taking everybody in Parliament altogether—it is true, distinguished in arts, science, etc.—and our Constitution in its wisdom gave that. They do not represent political parties or anything, but they represent really the high watermark of literature or art or culture or whatever it may be”

Since the inception of the Rajya Sabha, more than 150 members have been nominated by the President under this rule. Among these are some of the brightest minds in the country including scholars, jurists, social workers and artists. Over the years, these exceptionally talented individuals have undoubtedly raised the level of debating in the Parliament.

Here, it must be mentioned that these nominated members aren’t given any special privileges over and above the rules for the elected members. These members also need to fulfil the minimum attendance requirement of the house or else face disqualification. But the bone of contention is that these exceptional individuals were, at the first place, nominated to the house because they exhibited utmost integrity and work ethics in their field of work. They are expected to showcase exemplary behaviour and show the other member how it is done! Consequently, they are constantly under the radar of everyone. But if there is one thing we have seen from these champions’ past, it is that they know how to answer their critics with their work. Let just hope that the history repeats itself yet again!